Home About Us News

Stubbornly high shipping expenses for businesses are getting sealed into contracts for the next 12 months, forcing companies to pass the extra costs on to consumers.

The price for a container of goods from China to the U.S. West Coast and European ports has hovered near record highs for several months, and conditions are ripe for more increases even though spot rates usually soften this time of year. What’s more, new contracts being signed by some of the biggest U.S. importers indicate the spike won’t be a short-term blip. 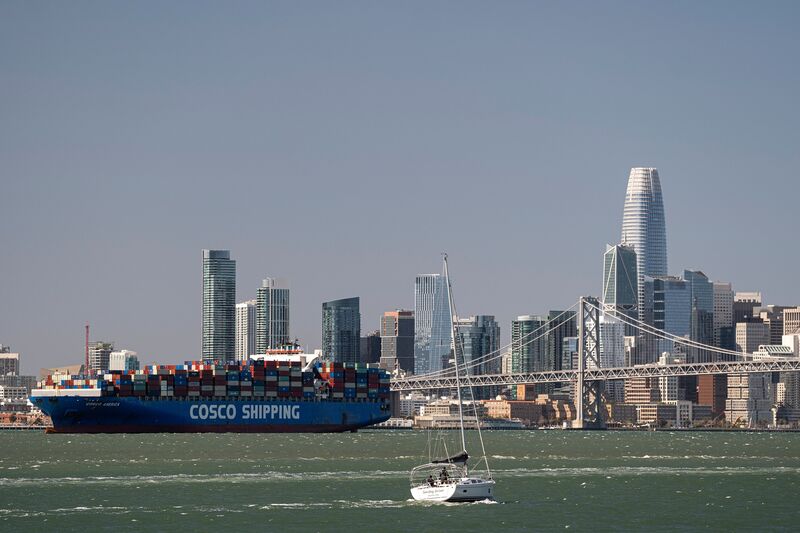 A container ship in the San Francisco Bay waits to enter the Port of Oakland in California on March 23.

Most large retailers and manufacturers sign annual deals with the ocean carriers to lock in their container freight rates, in private negotiations that typically take place this time each year.

Along the bellwether trade lane linking Asia with North America, contract rates in recent weeks are coming in around $2,500 to $3,000 for a 40-foot container -- 25% to 50% higher than a year ago, according to George Griffiths, an editor on the global container freight-pricing team at S&P Global Platts.

“That’s showing that people are expecting this to continue, that they’re not expecting rates to come down any time soon,” Griffiths said. The container carriers “are going into this in a significant position of strength,” he said.

So snarled are the nation’s supply channels that they’ve caught the attention of Federal Reserve officials who are trying to set monetary policy based on the speed of the U.S. recovery and the outlook for inflation.

While there are signs of solid factory activity in the coming months, “reports of shortages in materials and labor, as well as bottlenecks in transportation, signaled some potential restraints on the pace of the manufacturing recovery,” according to minutes released Wednesday of the central bank’s Federal Open Market Committee meeting on March 16-17.

“We’re going to have a conversation about inflation,” said Jim Bianco, president and founder of Bianco Research, during an interview with Bloomberg Television. “If we see it, it’s going to have to accelerate the Fed.”

The higher shipping costs have been sparked by a combination of factors, including soaring demand amid stimulus checks, saturated ports, and too few ships, dockworkers and truckers. The problems are too broad to be remedied by any short-term fix and are creating ripple effects across U.S. supply chains.

“I’m describing our businesses here as like trying to play Whack-A-Mole,” Kamler said in an interview. “You fix one problem and then something else pops up.” 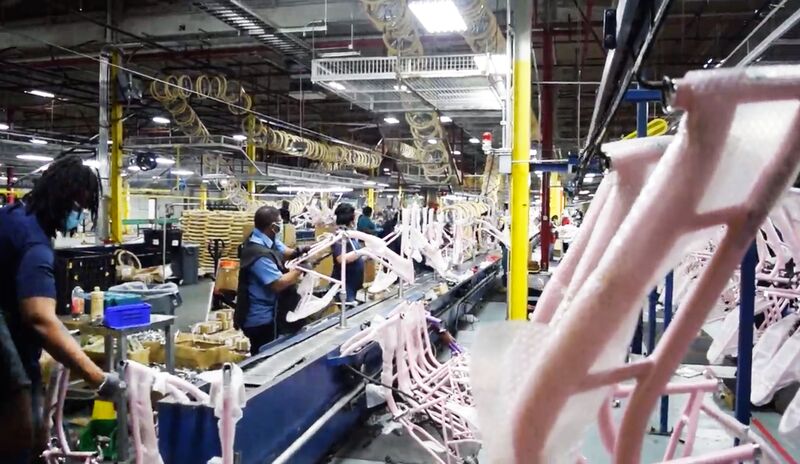 The CEO of the Fairfield, New Jersey-based bike producer, which employs 225 workers and imports its parts from Asia, said his shipping costs have more than doubled in recent months. On top of that, truckers are regularly missing appointments to pick up merchandise from warehouses, while a lack of parts is keeping production from meeting demand. Kent has raised prices on its bikes four times in the past 12 months, driven in part by freight costs, raw materials and tariffs.

Gordon Downes, CEO of the New York Shipping Exchange, an online cargo platform, said that larger businesses can often secure better shipping rates thanks to the size of their orders. Smaller ones, however, are at the mercy of spot rates and price increases.

“Especially if you’re not in a really big shipper that has a very sophisticated negotiating process and a lot of leverage, you’re forced to accept these contracts,” Downes said.

For example, price hikes and surcharges imposed on the smaller businesses that use spot rates can be attributed to anything from weather and ship congestion to the cost of fuel and raw materials.

Kamler said clauses in his contracts have let the container carriers charge premiums during the peak season, which he expects to run into mid-November. If he doesn’t accept the increases, he can’t build more bicycles. “When is a contract not a contract? It is when you sign a contract with a steamship company.” Kamler said.

The World Shipping Council, which represents the liner industry, said the biggest logistical difficulties are on land and that the market is driven by supply and demand.

“As shipping normally represents a small cost per unit for transported goods, demand is not very price sensitive,” John Butler, president and CEO of the Washington-based council, said in an emailed statement. “So, when demand outstrips capacity to the extent we see today, rates will rise.”

Jim Estill, chief executive officer of Canada’s Danby Appliances, said cargo sometimes sits at ports for as long as 10 days before getting loaded on trains or trucks. That’s leading to higher prices: A freezer that might normally sell for $350 is now going for about $70 more because of the shipping issues. “Price increases are just going through now,” he said.

In the U.S. and elsewhere, ocean shipping usually has two peak seasons each year. One comes before the Lunar New Year as companies secure inventories before Chinese factories shut down for holidays, and the other starts from late summer to prepare for Christmas shopping.

There was optimism that the interim period in 2021 could clear container backlogs, but the Suez Canal blockage last month added further strains that only dashed the hopes. 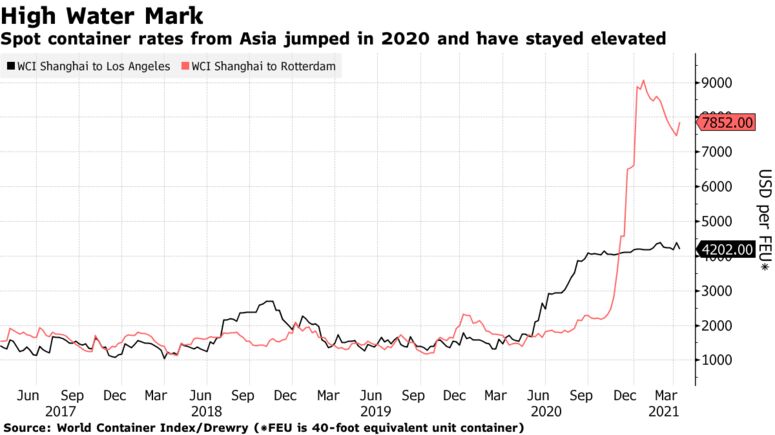 Problems are surfacing across the corporate landscape. Nike Inc. said revenue declined 10% in its latest quarter due to supply chain challenges, including the container shortages and U.S. port bottlenecks.

Kent’s Kamler said that normally he’d be extremely stressed out by the high shipping costs and a lack of parts. “The only saving grace is that all my competitors are in the same boat,” he said.

— With assistance by Catarina Saraiva